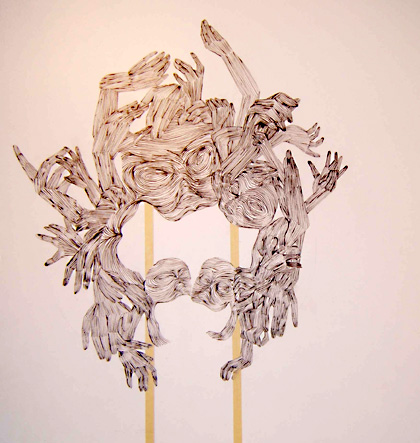 Bringing together the work of Glasgow based artist Fiona Jardine and Montreal artist Lauren Nurse, Leisure Projects presents a two week street-side window exhibition and special one-night event – a collaborative environment of art and live music amongst the glittering reflection of mirrors and disco-balls.

Lauren Nurse and Fiona Jardine will temporarily unite their work as Jardine’s carefully mapped wall painting provides a backdrop for the ephemeral images glimpsed through Nurse’s circular mirrors – etched with enigmatic images depicting subjects like bats and surfaces of the moon. Together their work references the obscured reveries and revelries of mid-night creatures and disco spent dancers.

Fiona Jardine studied Drawing and Painting at Duncan of Jordanstone College of Art and Design in Dundee and on the MFA programme at Glasgow School of Art. Her wall paintings are designed in response to the practice of the artists she shows with, reflecting the drama and tension between support and contextualisation: in this vein, she has worked with the French artist Lili Reynaud-Dewar at Public, Paris (_Egg Nogs and Flips_, April 2005) and Scottish artists Katy Dove and Michael Mallet at Glasgow Project Room (_Our Anomaly_, 2001). Outwith this area of interest, she is currently working with ideas of aesthetics that hover between the mediaeval and the modern, concentrating mainly on the production of sculptural reliefs. She has shown widely in the UK, as well as Rotterdam, Mexico City, Athens, Antwerp, New York and Vienna: forthcoming projects include a show with Will Daniels at Transmission Gallery, Glasgow as part of Glasgow International (April 2006); a group show Madame La Baronne Chapitre 2, at Centre d’art Mira Phalaina, Montreuil, (May 2006) and a collaborative venture How to Do White with Hannah Hewetson and Lisa Gallacher at Tramway, Glasgow (August 2006). She was recently awarded a major assistance grant by the Scottish Arts Council and is represented by Sorcha Dallas, Glasgow.

Lauren Nurse graduated from Concordia Fine Arts in 2002. She has recently been accepted to graduate studies programs in the Fine Arts at prestigious institutions such as The School of the Art Institute of Chicago (SAIC) and the MFA program at Guelph University. Lauren has completed residencies at Atelier Circulaire, Mtl., the Vermont Studio Center, U.S. and Atelier de l’Ile, Val-David QC. Lauren’s work is characterized by experimental approaches in screen-printing and print installation. Her most recent exhibition Tooth and Nail combined silkscreen on mirrors with fake snow and neon, probing the contradictory relationship of humans to the natural world. Lauren has shown widely in Quebec and across Canada, as well as completing curatorial projects in Toronto and Montreal. Lauren’s work was featured at this year’s Toronto International Art Fair; she is currently represented by Sandra Goldie Gallery, Montreal. Print work by Lauren Nurse will be on display during the Montreal Mois de l’art emprimé (May, 2006) as part of Salon écarlate : Estampe at the Maison de la culture, Frontenac.

Leisure Projects seeks not only to formalize moments of transition in a sublime night of art, tunes and toe tapping but also to continue our engagement with art projects in social spaces. By both formally inviting viewers to an art event and encouraging random passers by to experience a window exhibition we hope to emphasize the participatory and social role of the viewer in visual art.