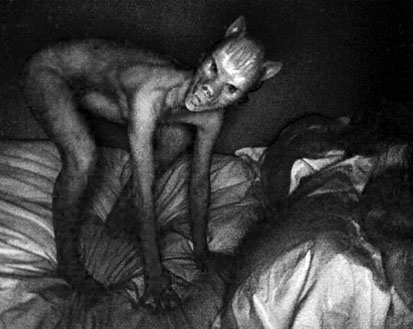 Darkling Eclipse is introduced with a flurry of silver confetti. Amongst the tinsel drifts of this explosion we can imagine golden scrapings from the encrusted facades of the Ringstrasse, the acanthus topped Secession and the brilliant rain of Klimt’s Danaë canvas. Throughout the vernissage we invite visitors to view the show through the eyes of paper masks, and in turn to populate the galleries with the confusion of their pale changeling faces. The events of this first evening will set in motion the central themes of this exhibition…

Darkling Eclipse is a changeling. The title for the exhibition was chosen as much for its syncopated rhythm in English as for its unconventionally symmetrical meaning. Almost a double negative, Darkling Eclipse articulates a crepuscular difference – the poetic dusk of “darkling” against the pearl lined shadow of an eclipse. Not only does the exhibition concept revolve around the shape shifting presence of “the changeling,” but the curatorial process itself has also been a changing multi-faced beast. As curators in residence for a two-month period at Kunstverien das weisse haus, we – Leisure Projects – have tried to soak in as much of the atmosphere of Vienna as we could, while at the same time visiting artist studios and developing an exhibition that would open at the end of our stay. In a tourist-like blur where time, place and culture overlap and become compressed, our impressions of the city’s architectural facades and interiors became conflated with our personal and professional interactions with Viennese contemporary artists. Our burgeoning theme, inspired initially by a mixture Adolf Loos interiors and the decadent Symbolists, gradually became located within the darker underbelly of decadence, growing more figurative and haunting in nature. The inclusion of Canadian artists, as well as the subtle swing in the exhibition’s concept, pushes the boundaries of the ornamental towards the subversive and supports a shift in our role as visiting curators from that of voyeuristic outsiders to providing an exchange between two cultures and two art scenes.

In his 1908 paper “Crime and Ornament,” Adolf Loos postulated, “The evolution of culture is synonymous with the removal of ornament from objects of everyday use.” In part because of its stirring title – as well as other racy, erotic and problematic assertions – “Crime and Ornament” continues to haunt visual artists in our time as we grapple with the contrary formal legacy of modernism and its schizoid sibling post-modernism. In modernism (and its post counterpart) we find a utopian longing for order trailed, and at times subsumed, by the bodily presence of folkloric imaginary, an interior world which often finds its exterior expression in ornament and the performance of ritual celebration. Taking this as its cue, the exhibition Darkling Eclipse has, as a whole, come to explore the mutability of decoration and the capricious power of ornament to both mask and transform an individual. It reflects the moment when surface matter, and the easy simple pleasure it brings, is betrayed and overwhelmed by something much more unwieldy, obscure, and even wild. Either unleashing uninhibited from behind an anonymous façade, or being restrained and contained by its fabricated structures – the decadent id rides the line of ornamentation via the figure of the changeling.

If the figure of the changeling doesn’t appear directly within the works included in this exhibition, they nonetheless reference its metamorphosis, facilitated or repressed by ornamental and decorative structures. In Luke Painter’s gothic, meticulously drawn images, decorative motifs creep from constraining suits of armour onto the faces of their wearers, claiming the skin as a surface for décor, and reinforcing the figures’ stiff formal poses while changing them into decorative mythic creatures.

Birgit Knoechl’s process of translation from formal structure to ornamental wildness operates as the shadow double of Painter’ drawings. Knoechl’s elaborate ink-drawn motifs are carefully catalogued in her studio, but once cut-out, they unfurl and transform into tangled three-dimensional objects with a disquieting density, creeping out of the walls and down from the ceiling. The ornate hand-drawn lines of both Painter and Knoechl’s work functions in opposition to the other – Painter’s decorative elements contain and envelope the changing subject, whereas Knoechl’s creations expel and release ornamental elements as part of their subjecthood.

Faith La Rocque’s She-wolf image merges the two oppositions represented by Painter and Knoechl, into one paradoxically un-hinged and highly guarded subject scene. It is the uncanny embodied. Oddly vulnerable, the masked or transformed she-wolf is poised on all fours, as if ready to pounce on its prey, all the while shrouded in the anonymity and resulting lack of consequence provided by her simple disguise. The social enjoyment and mischief of a costume party has shifted into a decadent aftermath, as the façade of ornament facilitates an atmosphere and individual turned out of control.

The grainy, night-time/nightmarish quality of La Rocque’s image is similar to that of Stacey Watson’s video. Behind the bars of a lavishly ornamental gate Watson’s figure en-acts futile nonsensical actions as if in an impenetrable trance. The gate seems to act as a both a gateway and barrier between two worlds, allowing fragments of the waking surface world – of role playing, routine, order and sense – to meld with the confused subconscious interior world of the subject. The resulting scene is incomprehensible and disquieting, hovering in a liminal dimension.

Creating a link with La Rocque’s She-wolf as well as Luke Painter’s portraits, mask-like visages haunt the work of Ayumi Rahn. In paintings based on sculptures from a myriad of sources, from Brancusi, to African figurines, to Greek heads, Rahn portrays hovering forms with inconstant qualities. Reminiscent of Freud’s collection of objects and antiquities, and indirectly all that it contentiously signified, the objects of Rahn’s fascination act as ghosts, changelings or totems, symbolising access to another realm that remains locked inside their passive objecthood, perhaps forgotten. Re-portraying them, Rahn further abstracts the original objects and their significance – sometimes eclipsing them with a gauze of pattern, other times simply repositioning them through her own subjective representation, she re-enforces their shifting disembodied condition.

Once again referencing the idea of the changeling, in Andrea Szilasi’s work conventional portraits have been transformed into werewolf like imagery. Cut into strips and collaged in reverse, the figures become fragmented masses of hair and texture. The effect is rather like looking into a broken or altered mirror, reflecting disjointed body parts and melding them together into new forms and new beings. Szilasi’s work splits and collapses the exterior human form revealing something else, interior, othered and unexpected.

As if providing the magical impetus for the acts of transformation represented in this exhibition, Karine Fauchard’s disco ball and prismatic diamond painting represent ornamental objects that transfix and transform human behaviour. A glimmer of silver on raw linen, Fauchard’s fading disco ball provides an atmosphere that signals the close of an evening, the straggling hazy last hours of a party, or the fragile decadent end of an era. Whereas her large painting of a diamond collapses its sparkle and prismatic cuts into a nest of coloured planes, articulating a surface void that fascinates and enchants the viewer, hypnotising them into reverie and possible revelry.

Like Fauchard and Szilasi, Fabian Seiz’s work also surveys the refracted and fragmented. Within a shoddily made structure, Seiz has created a tiny delicate cavern made infinite through the seemingly endless effect of mirroring – like a disco ball in reverse. Turned outside in, the mirrored space provides an individual and intimate experience for the viewer, whose very reflection is multiplied and made unreadable, projected into a sparkling void, a visual paradox of infinity and interior space. With Seiz’s work, we the viewers are finally able to experience a simulation of our own decadent refracted transformation and witness our own changeling capability.

Leisure Projects would like to thank the Kunstverein das weisse haus team – Elsy Lahner and Alexandra Grausam for their continued support and coordination in making this residency and exhibition possible. Also, interns Judith Stöckl and Raphaela Radl who devoted their time and very appreciated translation skills to this exhibition. We would ike to thank all the artists involved in the Darkling Eclipse exhibition, as well as all the artists who welcomed us into their studios and shared their work with us during our time in Vienna.