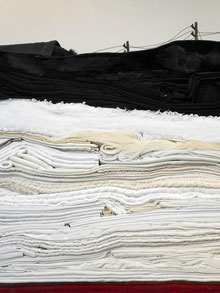 Leisure is pleased to announce the opening of the Candice Tarnowski exhibition Blankety Blank at the Toronto Harbourfront York Quay Centre. The exhibition is located in the Project Window at the west side of the York Quay Centre and is accompanied by a brief text by Leisure’s own Susannah Wesley.

WRAPPED UP IN THE POSSIBILITIES OF THE : BLANKETY BLANK BY CANDICE TARNOWSKI

They all brought their sheltering shawls… fur tippets…. a seal-skin cloak… cloth… Confronted with the cold confusion of a new world, they would need the comfort of their cloaks…(7) The initial culture shock was considerable. They were used to a genteel pocket- handkerchief of a country, neatly hemmed with hedgerows. Suddenly, there were giant lakes and forests flung from horizon to horizon like great bolts of cloth. (9) – Marion Fowler, The Embroidered Tent: Gentlewomen in Early Canada

Sliced and caught behind glass, the landscape of Blankety Blank sits like a fantastical geological specimen, raw, crisp and precise. Layer upon layer of textiles pressing up against one another like tectonic plates, building to the surface, forming rolling beds of earth. A small sealed landscape. A nowhere-world. A netherworld. The geological layers are white, frozen like ice, save for some small crucial nuggets of colour. The landscape is barren and black. It is formidable. It seems uninhabitable. The only sign of life is a delicate string of telephone poles running across the landscape, letting us know that communities do exist – but elsewhere. Not here. They signal a kind of placeless-ness and also underline a loneliness, in that any form of communication is inaccessible and unknowable, bound within the wires.

The landscape is also presented to us ‘afterwards’. After the poles and wires were erected. After the ground was made black and charred, like ash, reminding us of wild land fires or agricultural burning. We are seeing the landscape after the sublime spectre of fire, but we are left with something equally as unnerving, the void that is left in its wake. The history of the place has been topographically erased. On the surface, it appears an almost empty space. The physical remnants of the place have been, over time, pushed down underneath the ground. Scarves, bonnets, mittens, sheets, towels, linens, ribbon and rags, lay snugly dormant, pushed together, unreachable but not invisible, like memory. They are two-fold sources of comfort. Through their presence we know that the bleak surface world we see, deep down, rests on knowable, everyday, objects. Its foundation, though in the past, was living and sociable. We can even see community roles personified in the buried remnants – bonnets signal babies, a mitten signals a child, blankets conjure up a caregiver. But the objects themselves also acted as sources of comfort, they protected people and provided warmth. They worked to ensure survival. Though the idea of survival in this landscape seems ambiguous.